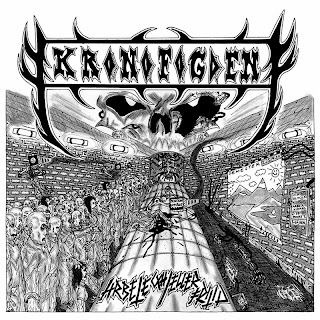 I´ve been looking forward to this LP ever since Krogh announced he would release it and while I was sure it wouldn´t disappoint, I figured the production would go more in the direction of the previously released EP "Käftarna Maler". Kronofogden does the exact opposite though and goes for a much rawer production which suits them perfectly. I´ve always thought Kronofogden sounds like Missbrukarna and where that band had a fair amount of US hardcore/punk in their sound I have to say Kronofogden adds a whole lot more of that to their Angry Hudik hardcore punk. There´s even a song featuring Hasse and Rolf from said band making this LP kind of a full circle kind of thing. This is full of straight forward raw and direct songs filled with great riffs and smart and well written lyrics. I especially like the nod to Fy Fan! with the song title Dum I Huvve (Inte Arbetslös). I could chose some favorite songs but decided not to because I´d rather listen to the whole thing. Pick this up, I guarantee you will not be disappointed. Besides the great music the packaging is really cool with a lyric insert and a 16 page comic book.

You can listen to and download the record here: Blindead bandcamp