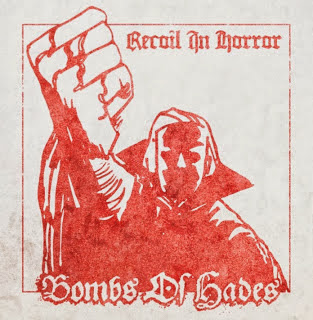 Bombs of Hades are a productive band to say the least. You know you´ll always get a few EP´s and splits inbetween albums and I like that. This is their latest one on swedish label De:Nihil and I would say that the a side track "Recoil In Horror" would fit nicely as an extra track on their debut EP "Carnivores". After a stomping intro/verse they up the speed for a while with a riff that really reeks of early Dismember/Nihilist before slowing it down with a groovy riff. This is the stuff that made me love BOH all those years ago and it´s great to see they´re not straying to far off that formula. Another thing I like about their EP´s and splits are the somewhat different choices of cover songs. One could go for obvious choices and do a Nihilist or Autopsy cover. But honestly, how exciting would that be? Here they cover the Black Sabbath song "Over and Over" from their 1981 album "Mob Rules" and they do a really good job at it. Not really familiar with the original, but listening to it now I must say BOH makes it heavier and somewhat doomier. All around this EP is a great effort although I don´t really see the point of only having two songs on a 7".

This review was kind of hard for me to write since the guys in Bombs of Hades are my friends. Honesty takes care of most things though.