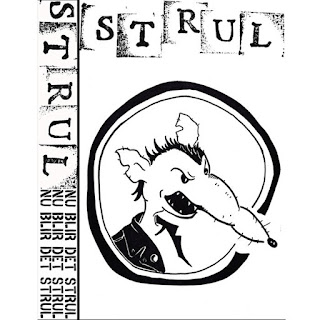 I got two demos sent to me by the always nice Mr. Hedberg a few months ago and in true Doomsday Mag fashion I haven´t reviewed them until now. I guess the "I´ll do it later" mentality has grown bigger in my life this year. Anyway, what we have here is eleven songs of full throttle hardcore influenced by Missbrukarna, Headcleaners and maybe a pinch of Totalitär. Or you can simply just call it råpunk if you like. Cathy riffs and a rabid Mr. Hedberg behind the mic who delivers clever lyrics that only can originate from a guy grown up in Kristinehamn that deals with idiots, russians, cops and more idiots.

Can´t say enough good things about this demo so I urge you to go and have a listen for yourselves. I´ve played this tape non stop since I got it and can easily say it´s one of this years best releases. That is if the upcoming EP won´t top it, if it even gets released in 2015.

This tape is now sold out, but the band have uploaded the whole thing to their bandcamp and you can also download the songs from there. Check it out and be sure to enjoy it as much as I do. 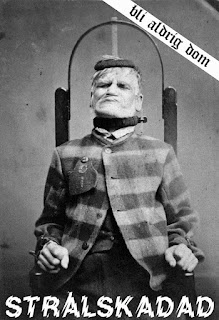 This is the second demo I got from Hedberg and here you find him behind the drums. I have to admit that for a guy who started playing drums a few years ago he manages to do what is expected in this type of band. Nothing to complain about in that department although it´s nothing spectacular. But I wouldn´t listen to this type of music if I were after some magic to happen behind the drum kit.

I haven´t listened to this tape as much as the Strul one cuz that took me completely by surprise, but listening to this now to freshen up my impressions I have to say that this is not bad at all. Pär the guitar player plays in both bands and you can tell by the catchy riffs going on through out both of these tapes. Five tracks of cool hardcore/råpunk is served and although this came in the same package as Strul I wouldn´t write this band off just yet. Don´t know how active they are at the moment but hopefully they haven´t broken up.

The whole demo is up at their Soundcloud page. Shoot them an email at straalskadad(a)gmail.com if you want to buy the tape.
Upplagd av Tompa kl. 12:06 Inga kommentarer: 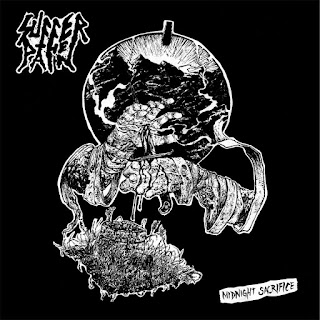 Suffer The Pain´s first LP serves up fourteen songs of metal punk this time leaning a bit more to the metal side of things. Still you can´t mistake that it´s Suffer The Pain you´re listening to. There´s some slower numbers thrown in among the fast ones and I think that was necessary for this to not be so one dimensional. It´s still primitive as hell (pun intended) but to manage to make fourteen songs interesting there needs to be some variation and even though they´re not reinventing their sound, they´re not at all actually, the slower songs is there for a reason and it works really well. There´s some re-recorded songs on here and although I´m not really a fan of that move you can´t deny the sheer greatness of the songs chosen to be re-recorded.

All in all a really cool LP and if you´re into bands like Dishammer you should definately pick this up.

I reviewed a promo CD. The actual vinyl is set to be released in November the last I heard. Keep checking Phobia Records for more info. You can also listen to the whole thing over at the bands bandcamp site.
Upplagd av Tompa kl. 21:48 Inga kommentarer: